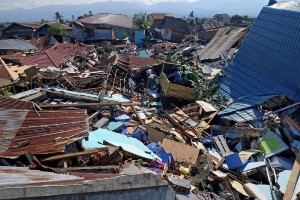 PALU, INDONESIA – The death toll from Indonesia’s quake and tsunami disaster nearly doubled to 1,200 on Sunday (Sept 30) and was expected to rise further, prompting authorities to announce mass burials in a desperate attempt to stave off disease.

As shattered survivors scoured make-shift morgues for loved ones, and authorities struggled to dig out the living or assess the scale of the devastation beyond the city of Palu, grim warnings came that the eventual toll could reach thousands.

“The casualties will keep increasing,” said national disaster agency spokesman Sutopo Purwo Nugroho, whose agency announced the jump in the toll from 420 earlier.

“Today we will start the mass burial of victims, to avoid the spread of disease.”

Rescuers on Sulawesi island raced against the clock and a lack of equipment to save those still trapped in the rubble, with up to 60 people feared to be underneath one Palu hotel alone. Rescuers said they heard voices and a child’s cries from under the rubble.

In a post to Twitter, the disaster agency spokesman also warned residents to be alert to the hoax forecasts of further tsunamis and earthquakes he said were appearing on social media.

Desperate survivors, now facing a third straight night sleeping outdoors, turned to looting shops for basics like food, water and fuel as police looked on, unwilling or unable to intervene.

The government was left with little option but to promise it would reimburse owners.

“Record everything taken, inventorise it. We will pay for it all,” said security minister Wiranto, who like many Indonesians goes by one name.

One survivor, Adi, was hugging his wife by the beach when the tsunami struck on Friday. Like countless others he has no idea where she is now, or whether she is alive.

“When the wave came, I lost her,” he said. “I was carried about 50 metres. I couldn’t hold anything. The water was spinning me around,” he said.

“This morning I went back to the beach, I found my motorbike and my wife’s wallet.”

Others have centred their search around open-air morgues, where the dead lay in the baking sun – waiting to be claimed, waiting to be named.