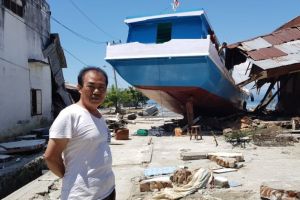 On Friday afternoon, Andi Rainaldi and his wife Flarahanie sat down to a meal of fried banana with extended family at Boya, a tiny waterside village in Donggala in Indonesia’s Central Sulawesi.

That was until the magnitude-7.5 earthquake struck around 6:00pm.

Donggala was the area closest to the quake’s epicentre, about 30 kilometres north. And the village of Boya was one of the worst-hit areas. As the house began shaking, not all residents had time to run outside before their homes collapsed and toppled into the sea.

Less than half an hour later a powerful tsunami swept in, hitting Boya and the surrounding coastline and washing more buildings into the water. Mr Rainaldi told the ABC the entire village had disappeared. Not a single house was left standing.

In all, seven members of Andi Rainaldi’s family disappeared, including his son, two nieces, his godson and his aunt. All were either trapped and killed under the rubble when the house collapsed, or washed out to sea when the huge waves pounded the shore.

Mr Rainaldi and his wife spent days searching for their son and relatives. But by yesterday — when the ABC arrived in Donggala — they already expected the worst. Several bodies were seen floating in the sea offshore.

A few hours later the couple found their son’s body at the local mosque, which has been turned into a temporary morgue.

“I couldn’t even identify my son by his face, only by his clothes,” Mr Rainaldi said.

“We found him physically unrecognisable.

At least 20 people are reported to have died in Donggala, and similar numbers were still missing yesterday.

Bereft family members visited the mosque throughout the day searching for loved ones. More than a dozen bodies were laid out, wrapped in sheets. Eerily, several still had their arms outstretched, or their hands splayed wide, an indication perhaps of their last moments struggling against falling rubble or giant waves.