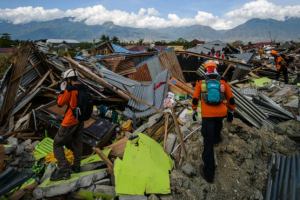 The official death toll is 1,944 but this number could triple as authorities lose hope of finding survivors.

About 5,000 people are still missing, feared death, after an earthquake and tsunami hit Sulawesi just over a week ago.

The official death toll stands at 1,944 but officials believe that when casualties from two of the hardest-hit areas of Palu – Balaroa and Petobo – are determined, that number could almost triple.

Those searching the ruins of the villages fear that thousands may have been swallowed up by the ground when the earthquake caused liquefaction, causing the solid surface of the ground to turn to liquid, engulfing homes in the mud.

“Based on reports from the heads of Balaroa and Petobo, there are about 5,000 people who have not been found,” said Sutopo Purwo Nugroho, spokesman for Indonesia’s disaster agency.

“Nevertheless, officials there are still trying to confirm this and are gathering data. It is not easy to obtain the exact number of those trapped by landslides, or liquefaction, or mud.”

Hopes of finding survivors ten days after the double disaster struck the Indonesian island have all but faded, but Thursday will be the official deadline for recovering bodies. After that people will be deemed missing, presumed dead.

In Balaroa, an entire government housing complex, home to over a thousand families, crumbled when the ground beneath it turned to liquid mud. The number of bodies lying beneath the mound of rubble, metal and mud is unknown.

Abdul Maruf, 40, was just stepping out of his house to join Friday evening prayers when he felt it. “Earthquake, get out!” he shouted to his wife and young children. “We got out and then the house crumbled to the ground about 15 seconds later.”

“I keep having flashbacks,” said his wife, Avia. “Every step I took the land broke off, split off. I was shocked.”

There were similarly apocalyptic scenes in Petobo, where dozens of villages disappeared into the ground, which became like quicksand when the earthquake hit, making it almost impossible for rescue teams to extract bodies.

“It would be a miracle to actually find someone still alive,” Muhammad Syaugi, the head of Indonesia’s search and rescue agency on Sunday. The government said that after Thursday these decimated areas would be designated as mass graves, and left untouched.

The number of people in Sulawesi requiring aid has risen to 200,000. Countries including the UK, US, Australia, India and Japan have sent in millions of dollars worth of aid, but food and water remain in short supply, and the Red Cross said it had treated around 1,800 people in its clinics. The earthquake ripped apart the roads, hindering access, so helicopters have been dropping aid supplies to more remote areas.

Some schools reopened this week to begin the process of counting how many pupils would be returning after the earthquake. The headteacher of SMP Negeri 15 Palu middle school, Abdul Rashid, said: “Classes haven’t started. We’re only collecting data to find out how many students are safe.” But on Monday morning, fewer than 50 out of 697 students showed up.