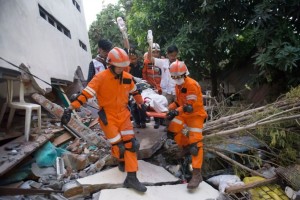 The number of people known to have died in Friday’s earthquake and tsunami in Indonesia has risen to 1,347, disaster response officials say.

The death toll jumped on Tuesday from a previously confirmed figure of 844.

The 7.5-magnitude quake struck just off the central island of Sulawesi, setting off a tsunami that engulfed the coastal city of Palu.

Aid supplies are beginning to arrive in the city, where survivors have no access to running water or electricity.

As tensions and need run high, police have begun guarding shops against looters.

Police fired warning shots and tear gas on Tuesday as people tried to take supplies from one shop.

“After day two the food supply started to come in, it only needed to be distributed,” he said. “We are now re-enforcing the law.”

Humanitarian relief convoys entering the city are also being escorted by soldiers and police.