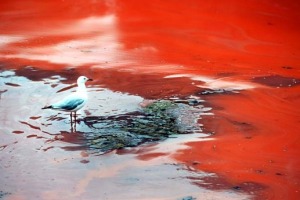 HARLINGEN — Like an uninvited and unwanted relative, red tide is knocking at the door again.

Texas Parks and Wildlife Department announced Wednesday a red tide event has been confirmed in the Gulf of Mexico south of Corpus Christi.

“On Aug. 24, the Image Flow Cytobot located at the University of Texas Marine Science Institute in Port Aransas alerted responders to the possible presence of Karenia brevis, a microscopic algae more commonly known as red tide,” TPWD said in a statement.
The water samples were collected at Bob Hall Pier near Corpus Christi, and after being analyzed, very low cell densities were confirmed.

The discovery of red tide raises the unpleasant specter of a recurrence of last year, when vast flotillas of dead fish wafted ashore and nasty respiratory ailments were reported by people up and down the coast from Corpus Christi into Mexico.

People stayed away from beaches, leading to the loss of tens of thousands of dollars or more in anticipated tourism-related revenue. Some people in cities near the water, such as Brownsville, reported respiratory problems even though they were some distance inland.

A day earlier, TPWD reported rangers at the Padre Island National Seashore, or PINS, had received reports of a possible fish kill and some respiratory irritation among beach-goers over the Labor Day weekend.
“An investigation conducted by PINS staff indicated a very small fish kill was associated with moderate cell densities of K. brevis from the 0 mile marker to the 25-mile marker,” TPWD said.

That would put the red tide activity south of Corpus Christi on the gulf side of North Padre Island. The mile markers start at the northern tip of the island and continue to mile marker 60 at the Port Mansfield Cut.
“Currently, the fish kill appears to be in small numbers and the extent is localized along this part of the barrier island,” TPWD said. “PINS staff is also reporting mild respiratory irritation in that area.”

Major red tide outbreaks do not necessarily occur every year, and there is no indication the outbreak on North Padre Island will worsen or migrate down the coast toward South Padre Island and Brownsville.
Red tide is caused by algae that are always present in warm coastal waters and these blooms are a naturally occurring phenomenon.

When the right mix of temperature, salinity and nutrients converge, the algae explode, creating large mats in warm coastal waters which can appear to be a red carpet.

One of the theories experts have proposed for the blooms links high temperatures to a lack of wind and rainfall.
The red tides, although unpleasant for beachgoers, fishermen and people living in coastal areas, cause no permanent damage to humans, beaches or overall fish stocks in coastal waters.