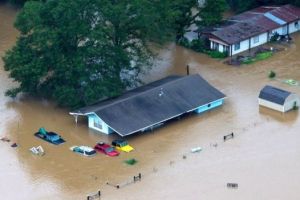 At least three people have died and thousands have been rescued after “historic” flooding swamped the US state of Louisiana.

The National Guard and emergency teams have used helicopters to rescue people stranded in their homes or cars.
Searches are continuing for missing people, as the rain is expected to continue over the weekend.
The heavy rainfall started on Friday where some areas received more than 17ins (43cm) of rain.
The neighbouring states of Alabama and Mississippi are also experiencing severe weather.
Louisiana Governor John Bel Edwards declared a state of emergency on Friday. On Saturday he said: “This is an ongoing event. We’re still in response mode.”

He and his family were relocated after water flooded their basement.
“This is a flood of epic proportions,” JR Shelton, the mayor of Central City told The Advocate newspaper. “When we talk about floods now, we’ll talk about the great flood of 2016. everything else pales in comparison.”

Shanita Angrum, 32, called the police when she realised her family were trapped in their home. An officer arrived and carried her six-year-old daughter to safety.
“Snakes were everywhere,” she told Associated Press. “The whole time I was just praying for God to make sure me and my family were OK.”

John Mitchell, a 23-year-old Louisiana resident, was forced to swim to safety with his girlfriend and her one-year-old daughter. They were rescued by police officers in a boat.
“This is the worst it’s been, ever,” Mr Mitchell said. “We tried to wait it out, but we had to get out.”