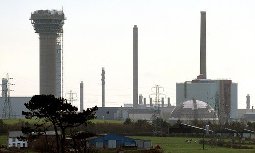 .The UK’s only plant for processing plutonium into new fuel for nuclear reactors is to close as a result of the Japanese tsunami, threatening the loss of hundreds of jobs.

The MOX site at Sellafield in Cumbria, which employs 800 workers, only had customers in Japan, where reactors have been shut down after the devastating earthquake and tsunami earlier this year.

Anti-nuclear campaigners said the plant had cost the public £1.4 billion in construction and running costs since building started in the mid-1990s, while union leaders described the closure as “ill-conceived and short-sighted”.

Friends of the Earth’s policy and campaigns director Craig Bennett said taxpayers were footing the bill for the “Alice-in-Wonderland economics of the nuclear industry.”

The Nuclear Decommissioning Authority (NDA) said there had been a “changed risk profile” for the Sellafield Mox Plant (SMP) following the Japanese disaster which crippled the Fukushima nuclear reactors.

“In order to ensure that the UK taxpayer does not carry a future financial burden from SMP the only reasonable course of action is to close SMP at the earliest practical opportunity.

Following news of the closure, shadow energy and climate change secretary Meg Hillier called on the Government to make a swift announcement on proposals to build a new MOX plant to process UK stocks of plutonium. She said a decision was needed to send a signal to investors that the UK was committed to the nuclear industry and a new fleet of reactors, and to secure jobs.

The Government launched a consultation earlier this year into whether the best solution for UK stocks of civil plutonium, created by past nuclear power generation and housed at Sellafield and Dounreay, was to reuse it as a fuel. The consultation looked at the possibility of building a new MOX plant, potentially at Sellafield, because it would be a cheaper option than using the existing facility which was beset by operational difficulties in the past.

The leader of Cumbria County Council, councillor Eddie Martin, said: “The Government must surely step in to ensure that nuclear skills and jobs are retained in West Cumbria for the longer term future of the industry and for the regeneration of Cumbria as a whole.

“The most effective way of doing this is for the Government to immediately confirm it will commission and build a new Sellafield MOX plant that will serve modern needs, as soon as possible, not least because other countries, such as Russia, are building MOX plants and the commercial opportunities may well bypass us if we are not quick off the mark.”