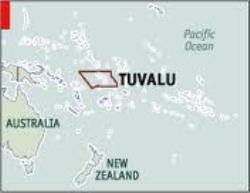 The Pacific island nation of Tuvalu has declared a state of emergency because of a water shortage.

With drought conditions and the breakdown of existing desalination plants, a state of emergency has been declared in the capital and also other outlying islands.

The water management adviser with the Secretariat of the Pacific Community, David Hebblethwaite, says if no reliable supply can be put in place, the shortage could start affecting the health of Tuvalu’s 10,000 residents.

“Potentially medical supplies if a prolonged drought leads to an escalation of diahorreal diseases, for example,” he said.

Surveys on Tuvalu have found the shortage has already led to to the deaths of some animals.

New Zealand has committed to fly in a new plant to help provide fresh water.

Its foreign minister, Murray McCully, says New Zealand officials are working with aid agencies including the Red Cross to ease the crisis.

A Red Cross report released last week said the former British colony relied mostly on rainwater, which had been scarce this year because of a La Nina weather pattern across the Pacific.