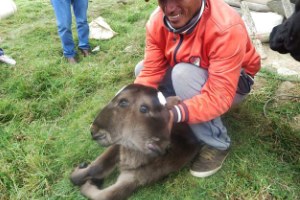 A two-headed calf born in Peru has divided villagers wondering if it is a good or a bad omen from God.

Some believe that the calf, born in the north western Cajamarca region, was sent by the almighty as a warning over all the evils in the world.

But others believe it was a mythical birth and the cow must have gone through a swamp when she was in season for it to happen.

Others claim it is the result of environmental pollution due to mining in the region.

Despite its amazing appearance, the tragedy is that the animal cannot feed itself because its two heads are so heavy it is unable to lift them.

It was born in the community of Vista Alegre, and its two heads are fully formed. It has two noses, two sets of eyes and two mouths.

But it does not have the strength to stand up so farmer Edward Villegas Rubio is feeding it milk by the bottle.

Close relative Clodomiro Becerra, said: ‘It was a very difficult birth and we had to force it because it had two heads.’

Vet Rolando Ballena Chumioque, an official of the Agricultural Agency, tried to calm the fears of villagers.

He said the birth defect could have been caused by the use of antibiotics during the gestation period or that it could be a congenital defect that happened during pregnancy.

He denied it could be a result of environmental pollution in the district of Hualgayoc due to the presence of mining.

In 2009, two calfs with two heads were born in the district of Chota, in the same Peruvian province.

One of them was born dead and the other one alive and was baptized with the name of Milagritos (Miracles) and managed to live for seven months in the laboratory of Pathology at the National University of Cajamarca.