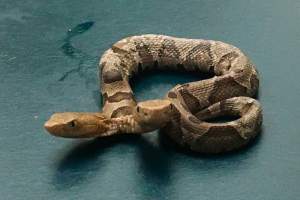 A wildlife and conservation research hospital says a two-headed snake recently found in Woodbridge, Virginia, may be sent to an educational facility.

The Eastern copperhead was found by a woman in her backyard on September 16. The Wildlife Center of Virginia says a state herpetologist, a scientist who studies reptiles and amphibians, brought the snake to the hospital last Thursday for an examination.

A hospital news release says the two heads were found to have two tracheas (windpipes that connect to the lungs for breathing) and two esophagi (canals that connect the throat to the stomach). They share one heart and one set of lungs.

State biologists believe both heads are capable of biting and distributing venom, the Charlotte Observer reported.

State herpetologist J.D. Kleopfer said in a Facebook post that two-headed snakes are rare because “they just don’t live that long.”

Editor’s Comment: This deformity may be caused by toxic metals as snakes lay their eggs in the ground just like the locusts of Revelation 9.