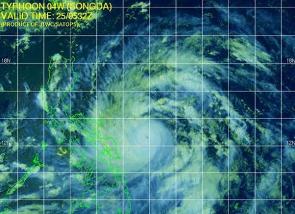 Songda was 190 miles east of Northern Samar province as of 4 p.m. local time today with winds gusting to 160 kilometers per hour, the Philippine Atmospheric, Geophysical & Astronomical Services Administration said on its website.

It’s expected to make landfall in the afternoon of May 27, the agency said. In parts of the capital, downpours left knee-deep flooding, according to the Metro Manila Development Authority.

“We are preparing for a worst-case scenario,” Civil Defense Chief Benito Ramos said in a briefing today. Songda may “linger” in the country and surpass the 1.3 billion pesos ($30 million) in agriculture and infrastructure damage caused by Typhoon Aere early this month, Ramos said.

The province of Albay, in the Bicol region, plans to evacuate 50,000 families living in areas prone to floods and landslides, the head of its disaster management office, Cedric Daep, said by phone today. Cebu Air Inc. canceled two afternoon flights from Manila to Naga, also in Bicol, according to the airline’s website.

The Philippines gets hit by an average of 20 cyclones each year that form over the Pacific Ocean to the east. In September 2009, Tropical Storm Ketsana submerged most of Manila after dumping 41 centimeters of rain in six hours, killing more than 400 people.

Songda is moving at 15 kilometers per hour and is expected to hit the province of Aurora, Isabela, around 2 p.m. on May 27, Science and Technology Undersecretary Graciano Yumul said in an interview with ABS-CBN News Channel.

Songda may hit Japan by May 30, according to the U.S. Navy Joint Typhoon Warning Center.

The typhoon may pass over the main island of Honshu, including Fukushima prefecture where Tokyo Electric Power Co.’s crippled nuclear plant is located, according to the forecast. The storm is expected to weaken before reaching Japan.

Engineers at the Fukushima Dai-Ichi nuclear station are trying to cool reactors and stop radiation leaks after the plant was hit by a March 11 earthquake and tsunami.