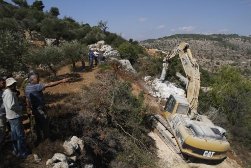 The United Nations urged the world’s cities on Monday to protect their trees, saying they can ease fallout from natural disasters and can help a metropolis mitigate the effects of climate change.

“Good practices in urban and peri-urban forestry can contribute to building a resilient city in terms of mitigation and adaptation to the effects of climate change,” a senior official at the UN Food and Agriculture Organisation (FAO) said in a statement.

“The accelerating rate of natural disturbances affecting cities such as storms, droughts, floods and landslides reminds us that resilience to disasters is of critical importance and that trees play an important role in protecting city environments,” said Eduardo Rojas-Briales, the assistant director-general for forestry at the Rome-based FAO.

“Urban forests also improve the wellbeing and health conditions of citizens by cooling the environment, particularly in arid zones,” said the statement, released on the occassion of World Habitat Day.

As more and more people around the world live in cities and their surroundings, countries need to “pay more attention to managing and protecting urban and peri-urban forests,” said the statement.

The FAO said it was developing guidelines to promote sound policies on trees in major metropolitan areas, due to be published in 2012.