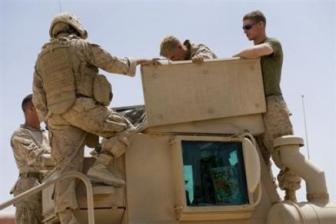 Effects of Climate change, as a result of global warming, have been studied by the Military Advisory Board, which is comprised of 11 of the most respected former United States military flag officers, and the department of National Intelligence for several years. They now recognize the importance of considering global climate change impacts in all future defense planning horizons.

In 2007, the MAB came out with the “National Security and the Threat of Climate Change”, after eight months of research and meetings with military, intelligence, diplomatic experts, climate scientists, business leaders, and foreign officials, including representatives of the British Government–on issues of security and climate.

The report evaluates the likely effects of climate change, including rising sea levels, increased desertification and availability of critical resources such as food, water and energy, and how those changes could trigger conflicts around the globe. It explores ways projected climate change is a “threat multiplier” in already fragile regions, exacerbating conditions that contribute to failed states — the breeding grounds for humanitarian disasters, extremism and violence.

In July, 2009, the Senate Foreign Relations Committee convened a hearing lead by chairman, Senator John Kerry (D-MA).
Kerry opened the meeting with this introduction (in part):
Climate change injects a major new source of chaos, tension, and human insecurity into an already volatile world. It threatens to bring more famine and drought, worse pandemics, more natural disasters, more resource scarcity, and human displacement on a staggering scale. Places only too familiar with the instability, conflict, and resource competition that often create refugees and IDPs, will now confront these same challenges with an ever growing population of EDPs—environmentally
displaced people. We risk fanning the flames of failed-statism, and offering glaring opportunities to the worst actors in our international system. In an interconnected world, that endangers all of us.

Nowhere is the nexus between today’s threats and climate change more acute than in South Asia–the home of Al Qaeda and the center of our terrorist threat. Scientists are now warning that the Himalayan glaciers, which supply water to almost a billion people from China to Afghanistan, could disappear completely by 2035.
Water from the Himalayas flows through India into Pakistan. India’s rivers are not only agriculturally vital, they are also central to its religious practice. Pakistan, for its part, is heavily dependent on irrigated farming. Even as our government scrambles to ratchet down tensions and prepares to invest billions to strengthen Pakistan’s capacity to deliver for its people—climate change is threatening to work powerfully in the opposite direction.

Worldwide, climate change risks making the most volatile places even more combustible. The Middle East is home to six percent of the world’s population but just two percent of the world’s water. A demographic boom and a shrinking water supply will only tighten the squeeze on a region that doesn’t need another reason to disagree.
Closer to home, there is scarcely an instrument of American foreign policy that will be untouched by a changing climate. Diego Garcia Island in the Indian Ocean, a vital hub for our military operations across the Middle East, sits on an atoll just a few feet above sea level. Norfolk, VA, home to our Atlantic Fleet, will be submerged by one meter of sea level rise. These problems are not insurmountable, but they will be expensive, and they risk compromising our readiness.

Peter Ogden, chief of staff to Todd Stern, the State Department’s top climate negotiator had this to say about the issue:
“The sense that climate change poses security and geopolitical challenges is central to the thinking of the State Department and the climate office.”
Sharon E. Burke, vice president for natural security at the Center for a New American Security, testified that the hearing was “an important demonstration of the fact that global climate change is now taken seriously as a strategic challenge.”
According to President Obama’s National Intelligence Director, Dennis C. Blair:
“We assess climate change alone is unlikely to trigger state failure in any state out to 2030, but the impacts will worsen existing problems such as poverty, social tensions, environmental degradation, ineffectual leadership, and weak political institutions. Direct impacts to the United States include warming temperatures, changes in precipitation patterns, and possible increases in the severity of storms in the Gulf, increased demand for energy resources, disruptions in US and Arctic infrastructure, and increases in immigration from resource-scarce regions of the world.”
Senator Kerry summed up the over all consensus with this statement:
“If we fail to connect the dots — if we fail to take action — the simple, indisputable reality is that we will find ourselves living not only in a ravaged environment, but also in a much more dangerous world.”