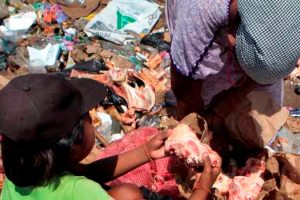 People all over Venezuela head to city dumps in hopes of finding food or scraps that can be exchanged or sold for food.

This situation has become increasingly common in Los Puertos de Altagracia, the capital of the municipality of Miranda in the state of Zulia. There, citizens look through the debris of what bakeries, among other businesses, have discarded in the hopes of making it through the week.

“People come here from neighboring areas of Mother Mary of St. Joseph, Punta de Leiva, Punta de Piedras and La Guardarraya sectors,” one inhabitant, who did not want to be named, said. “Parents come with their children to see what they can get to eat.”

Henry Quintero and his girlfriend Jackeline Gutierrez described having to wait for the arrival of garbage trucks as a strategy for finding the best food.

“Surviving is what we do. Here we get bread, flour or wheat dough disposed in bakeries, with which to make arepas or bread. We also pull out vegetables and fruits. Of course, they are not very good,” Quintero said. “We have six people in the family — my four children, my wife and me. Nowadays we rely only on what we get here.”

Gutierrez said the weight of their children was one of the reasons they resorted to trash piles.

“My five-year-old has lost about five kilos, the oldest one has lost 10. I used to weigh 80-something, and I’m now I’m 49 kilos. If we continue like this we will starve,” he said.

Jessica Gonzalez, 25, unemployed and the mother of three children, said many seek scraps of meat or raw chicken that for them are considered a treasure. To dig in the trash, she said she must cover her mouth and nose with a rag.

She said she tries not to see what other people eat, and if possible, gets to the dumpsters early for fresher food.

Many parents have complained about the inability to feed their children, who are at risk of dying from malnourishment. Ysbelia Fernandez said she lost her one-year-old baby for this reason.

“The child had a cleft lip, and even though I was in medical management at the University Hospital of Maracaibo, he only weighed four kilos,” she said. “Because we had no money, we could not give him the nutrition he needed. The child had a fever and as we did not have transport, we couldn’t arrive in time to the hospital and he died. The doctor said he was malnourished.”