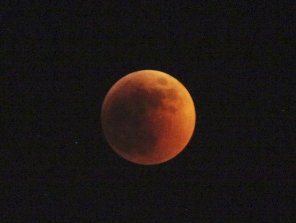 The moon turns red during total Lunar Eclipse of the moon seen in Nairobio, Kenya, June 15, 2011.

Asian and African night owls were treated to a lunar eclipse, and ash in the atmosphere from a Chilean volcano turned it blood red for some viewers.