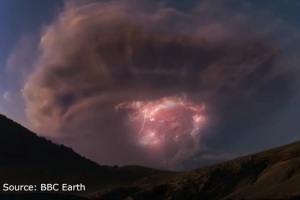 The video, from the BBC’s Patagonia series, was posted to the British broadcaster’s Facebook page overnight and captured by Chilean filmmaker Christian Muñoz-Donoso during an eruption at the Calbuco volcano.

Also known as a “dirty thunderstorm”, lightning can occasionally be sparked during eruptions when dry ash particles are stripped of their electrons by the force of an eruption.
[yendifplayer video=46]