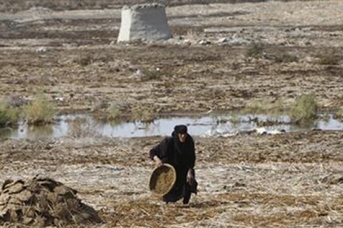 Electricity supply to Nasiriyah drops by 50% as Euphrates river dries up Two million people face life without water
A water shortage described as the most critical since the earliest days of Iraq’s civilisation is threatening to leave up to 2 million people in the south of the country without electricity and almost as many without drinking water.

An already meagre supply of electricity to Iraq’s fourth-largest city of Nasiriyah has fallen by 50% during the last three weeks because of the rapidly falling levels of the Euphrates river, which has only two of four power-generating turbines left working.

If, as predicted, the river falls by a further 20cm during the next fortnight, engineers say the remaining two turbines will also close down, forcing a total blackout in the city.
Down river, where the Euphrates spills out into the Shatt al-Arab waterway at the north-eastern corner of the Persian Gulf, the lack of fresh water has raised salinity levels so high that two towns, of about
3,000 people, on the northern edge of Basra have this week evacuated.
“We can no longer drink this water,” said one local woman from the village of al-Fal. “Our animals are all dead and many people here are diseased.”

Iraqi officials have been attempting to grapple with the magnitude of the crisis for months, which, like much else in this fractured society, has many causes, both man-made and natural.
Two winters of significantly lower than normal rainfalls – half the annual average last year and one-third the year before – have followed six years of crippling instability, in which industry barely functioned and agriculture struggled to meet half of subsistence needs.
“For thousands of years Iraq’s agricultural lands were rich with planted wheat, rice and barley,” said Salah Aziz, director of planning in Iraq’s agricultural ministry, adding that land was “100% in use”.
“This year less than 50% of the land is in use and most of the yields are marginal. This year we cannot begin to cover even 40% of Iraq’s fruit and vegetable demand.”

During the last chaotic five years, many new dams and reservoirs have been built in Turkey, Syria and Iran, which share the Euphrates and its small tributaries. The effect has been to starve the Euphrates of its lifeblood, which throughout the ages has guaranteed bountiful water,
even during drought. At the same time, irrigators have tried tilling marginal land in a bid for quick yields and in all cases the projects have been abandoned.
“Not even during Saddam’s time did we face the prospect of something so grave,” said Nasiriyah’s governor, Qusey al-Ebadi. Just east of the city, the Marsh Arabs are also on the edge of a crisis unprecedented even during the three decades of reprisals they faced under the former dictator.

“The current level of the Euphrates cannot feed the small tributaries that give water to the marshlands,” he continued. “The people there have started to dig wells for their own survival. There is no water to use for washing, because it is stagnant and contaminated. Many of the animals have contracted disease and died and people with animals are leaving their areas.”

Nowhere is Iraq’s water shortage more stark than in what used to be the marshlands. Towards the Iranian border and south to the Gulf, rigid and yellowing reeds jut from a hard-baked landscape of cracked mud.
Skiffs that once plied the lowland waters lie dry and splintering and ducks wallow in fetid green ponds that pocket the maze of feeder streams. Steel cans of drinking water bought by desperate locals line dirt roads like over-sized letter boxes.

The Euphrates, once broad and endlessly green, is now narrow and drab. In parts it is a slick black ooze, fit only for scores of bathing water buffalo. Giant pumps lay metres out of reach. Some are rusting. “Not long ago, the level of the Euphrates was at this rust line,” said Awda Khasaf, a local leader in the al-Akerya marshlands, as he pointed at the dwindling river.

“It has now dropped more than 1.5m. This river feeds all the agriculture lands and marsh lands in Nasiriyah. It smells like this because it is stagnant,” he said. “We turned to agriculture in 1991 after Saddam’s rampage, but now the government has ordered us to stop rice farming.”
Further up the river Sheikh Amar Hameed, 44, from Abart village said: “We have lost the soul of our lives with the vanishing water. We have lost everything. We are buying drinking water now. The government must find a solution. The young will all become thieves. They have no prospects.”
Iraq’s water minister, Dr Abdul Latif Rashid, this week estimated that up to 300,000 marshland residents are on the move, many of them newly uprooted and heading for nearby towns and cities that can do little to support them.
The Marsh Arabs are semi-nomadic and large numbers have remained displaced since Saddam drained the marshes in 1991.
“In the last 20-30 years our neighbouring countries have built a number of structures for collecting water or diverting water for their agricultural lands,” Dr Rashid said.
“In some cases, they have diverted the path of the river for their internal use. This has had a very damaging effect. We have a large number of branches of the Tigris that we share with Iran. In most their volumes are low, or completely dried up. In 2006/07 [the marshlands] almost reached 75% of original levels. Now the surface water is around 20%. Water resources have this year become not only serious, but critical. Iraq has not faced a water shortage like this.”

Officials have tried to compensate by digging wells and bores, especially in the ravaged provinces of the south and in Anbar, west of Baghdad. Delegations have also travelled to Turkey and Syria, where they were warmly received, but have achieved few changes. “We were expecting much more of a release from Turkey,” Dr Rashid said. “Iran has been less receptive. We have had no response from them at all.”