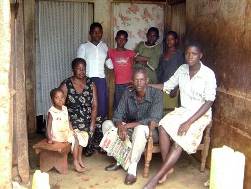 She’s a 40-year-old mother of eight, with a ninth child due soon. The family homestead in a Burundi village is too small to provide enough food, and three of the children have quit school for lack of money to pay required fees.

“I regret to have made all those children,” says Godelive Ndageramiwe. “If I were to start over, I would only make two or three.”

“My father had 25 children — I have only 14 so far, and expect to produce more in the future,” says Kasadha, who has two wives. He considers a large family a sign of success and a guarantee of support in his old age.

By the time Ndageramiwe’s ninth child arrives, and any further members of the Kasadha clan, the world’s population will have passed a momentous milestone. As of Oct. 31, according to the U.N. Population Fund, there will be 7 billion people sharing Earth’s land and resources.

In Western Europe, Japan and Russia, it will be an ironic milestone amid worries about low birthrates and aging populations. In China and India, the two most populous nations, it’s an occasion to reassess policies that have already slowed once-rapid growth.

But in Burundi, Uganda and the rest of sub-Saharan Africa, the demographic news is mostly sobering as the region staggers under the double burden of the world’s highest birthrates and deepest poverty. The regional population of nearly 900 million could reach 2 billion in 40 years at current rates, accounting for about half of the projected global population growth over that span.

Is catastrophe inevitable? Not necessarily. But experts say most of Africa — and other high-growth developing nations such as Afghanistan and Pakistan — will be hard-pressed to furnish enough food, water and jobs for their people, especially without major new family-planning initiatives.

“Extreme poverty and large families tend to reinforce each other,” says Lester Brown, the environmental analyst who heads the Earth Policy Institute in Washington. “The challenge is to intervene in that cycle and accelerate the shift to smaller families.”

Dealers charging for unnecessary car repairs? .
msnbc.com
Woman taps ‘Occupy’ protest to avoid foreclosure .
The Globe Gazette via AP
Tell your fear of losing your way to get lost .
Getty Images/OJO Images
Your Career: Women still can’t get a leadership break .
BNC News
My (short) audience with the king of Bhutan .
..Without such intervention, Brown says, food and water shortages could fuel political destabilization in developing regions.

“There’s quite a bit of land that could produce food if we had the water to go with it,” he said. “It’s water that’s becoming the real constraint.”

The International Water Management Institute shares these concerns, predicting that by 2025 about 1.8 billion people will live in places suffering from severe water scarcity.

Looking ahead, the U.N. projects that the world population will reach 8 billion by 2025, 10 billion by 2083. But the numbers could be much higher or lower, depending on such factors as access to birth control, infant mortality rates and average life expectancy — which has risen from 48 years in 1950 to 69 years today.

“Overall, this is not a cause for alarm — the world has absorbed big gains since 1950,” said Bongaarts, a vice president of the Population Council. But he cautioned that strains are intensifying: rising energy and food prices, environmental stresses, more than 900 million people undernourished.

“For the rich, it’s totally manageable,” Bongaarts said. “It’s the poor, everywhere, who will be hurt the most.”

The executive director of the U.N. Population Fund, former Nigerian health minister Babatunde Osotimehin, describes the 7 billion milestone as a call to action — especially in the realm of enabling adolescent girls to stay in school and empowering women to control the number of children they have.

“It’s an opportunity to bring the issues of population, women’s rights and family planning back to center stage,” he said in an interview. “There are 215 million women worldwide who need family planning and don’t get it. If we can change that, and these women can take charge of their lives, we’ll have a better world.”