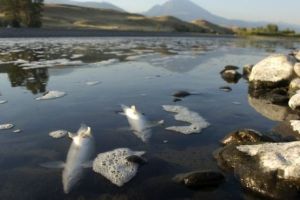 Montana officials have indefinitely closed the Yellowstone River over concerns of a deadly parasite that has killed thousands of fish.

A 183-mile-stretch (294km) of the river is closed to prevent infected fish from spreading to other waterways.
Wildlife workers are surveying the area to determine whether the parasite, which causes kidney disease, has infected other fish downstream.

State officials have said the closure could last for weeks or months.

The massive fish kills comes during the popular summer months, which draws tourists to the region for outdoor activities such as fishing and rafting.

The nearby Yellowstone National Park is also celebrating the 100th anniversary of the National Park Service on Thursday, but no closures are planned for inside the park.

More than 2,000 mountain whitefish have been found dead along the banks of the river, but officials estimate about 20,000 more whitefish are presumed to have been killed by the parasite.
Some rainbow trout, a highly sought after fish, have also been affected.