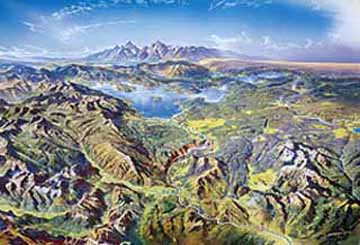 The huge volcano under Yellowstone National Park has been rising at an unprecedented rate during the past several years, according to a new study.

In the ancient past, the Yellowstone volcano produced some of the biggest-known continental eruptions, but the recent rising doesn’t mean another doomsday eruption is looming, scientists say.

The recent rising is unprecedented for Yellowstone’s caldera — the cauldron-shaped part of the volcano — but it’s not uncommon for other volcanoes around the world. The new study has simply revealed a more active caldera at Yellowstone than scientists realized.

“It’s pretty exciting when you see something that’s five times larger than what you’ve seen in the past,” said Charles Meertens, director of the nonprofit UNAVCO facility in Boulder, Colo., which aids geoscience research. Meertens is a former postdoctoral fellow under one of the study’s authors, Robert Smith of the University of Utah in Salt Lake City.

In 2004, the caldera was swelling at 2.8 inches a year in some parts, but the uplift has since slowed to a low of 0.2 inches a year, according to the study, which was published in the December edition of the journal Geophysical Research Letters.

Calderas rise just like an inflating bubble. The inflating could either be caused by magma rising and pushing up on the caldera, or the magma could be heating gases and hydrothermal fluids (the same fluids that spew from Yellowstone’s Old Faithful geyser) and pushing them against the caldera, Meertens told OurAmazingPlanet. Whatever the exact mechanism, a rising caldera is not enough to signal an eruption.

“It’s not a portent of doom,” said Erik Klemetti, a volcanologist at Denison University in Granville, Ohio, who was not involved with the
study. “It seems like these restless calderas are always sort of rising and falling, but that by itself doesn’t mean it’s about to erupt.”

Volcanologists look at several indicators when deciding whether an eruption is looming, Klemetti said. Warning signs typically include an increase in earthquakes under the volcano, changes in the gases being emitted, change in the volcano’s shape, and steam and heat escaping from the top.