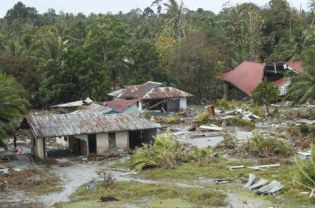 North Pagai, Indonesia. Indonesian tsunami survivors complained Monday they are being forced to scavenge for wild roots because aid had not arrived a week after the wave crushed their remote villages.

Indonesian officials have admitted they are struggling to care for 65,000 people displaced by an erupting volcano on Java island and the tsunami which smashed into the Mentawai island chain off Sumatra last Monday.

But President Susilo Bambang Yudhoyono dismissed the criticism, telling relief officials to do their best and ignore complaints.

“I was informed … that there had been criticism and comments. I say don’t worry about all that,” he said at a weekly cabinet meeting. “It always happens. There are people who give direct help, and there are also many who criticise and forget to help.”

The latest official death toll from the tsunami stood at 431 with another 88 missing, feared dead, and almost 15,000 made homeless.

Another 50,000 are in temporary shelters in central Java some 1,300 kilometers to the east, where the Mount Merapi volcano erupted again on Monday. An eruption last week killed 34 people.

Emergency response officials denied reports that tsunami aid is rotting and being looted. They blame delays in aid distribution on bad weather and the difficulty of reaching isolated communities by sea or air.

Flung onshore by a powerful 7.7-magnitude earthquake, the tsunami flattened around 10 villages along undeveloped beaches popular with foreign surfers.

Tons of aid are piling up at the Sumatran port of Padang, half a day’s voyage away by sea from the worst-hit islands, and at unaffected towns on the Mentawais such as Sikakap and Tua Pejat.

One bedraggled survivor arrived in Sikakap on Monday and loaded his own speed boat with as much food, water and blankets as it could carry, saying about 250 people in his village had not received any outside assistance at all.

He said they had eaten all the wild bananas and roots they could find, and were becoming sick from drinking water from a river which contained corpses.

“We have survived on yams and bananas but we’ve finished those. There’s nothing to eat now and we’re all very, very hungry,” Perholongan Senaga said.

“We drank from rivers, which were dirty and stank of dead bodies. Many of us have fallen ill with diarrhoea from drinking that water.”

He said the villagers on North Pagai island had no shelter, so three to five families were squeezing into “makeshift huts” every night. “It’s very uncomfortable. It’s been a week, why hasn’t there been any help?” he asked.

Demas Sakerebau, a village chief on North Pagai island, said aid only reached one hamlet in his area for the first time on Sunday.

He described relief packages being dropped by helicopters into the sea, flooded rice paddies and trees.

“Only part of the aid has reached the residents. It wasn’t enough,” he added.

Khalid Saifullah, a coordinator for independent local aid agencies, said local authorities had been caught unprepared for the disaster even though scientists have long warned the region is prone to tsunamis.

The 2004 Asian tsunami which killed almost 170,000 people in Indonesia was also triggered by an earthquake off the Sumatran coast, and scientists say last week’s quake was directly related to that catastrophe.

“We understand that there’s been bad weather, that’s a serious challenge. But this should have been predicted earlier,” Saifullah said. “Delays have been due to inadequate preparation.”

Australia, the European Commission and the United States have pledged aid worth a total of five million dollars for victims of the tsunami and the volcano.