Arsenic Found In Fish In Taiwan 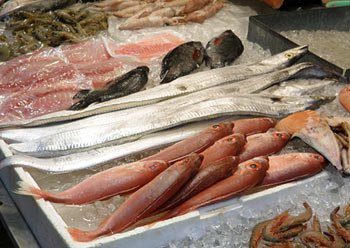 The New Taipei City Department of Agriculture has launched an investigation into allegations that arsenic-tainted fish are being distributed for sale to wet markets in the Taipei area.

The media report that made the allegations added that officials and consumers were both unaware that the fish had been caught from an area where fish are contaminated and should not be consumed.

As the fish were all caught in one section of the heavily polluted Dansui River, which flows across the capital and surrounding New Taipei City, investigators will be taking fish samples from the lower reaches of the river to have them tested for poisonous compounds. They will also look into whether the contaminated fish were sold elsewhere.

Arsenic is a heavy metal known to cause cancer.

The report, published in the Chinese-language Apple Daily newspaper this week, claimed that deceitful fishers had caught toxic tilapia and possibly also mullet from the tainted river and sold them to Taipei Fishery Marketing Corp. The major grocery and produce wholesaler in Taipei then distributed the fish to smaller markets around the city, reports Taipei Times.

The Marketing Corporation said it randomly inspects 7.5 per cent of all the fish caught in the Dansui River daily before the fish are shipped to seafood wholesale markets, ICRT reports.

Testing for toxins such as heavy metals like arsenic “is conducted by Taipei City’s Department of Health once or twice a month,” said Marketing Corporation General Manager Chen -Ching-hua.

New Taipei City Deputy Mayor Hou Yu-ih said the water and environs of the Danshui River fall under the jurisdiction of the Ministry of Economic Affairs’ Water Resource Agency, and that New Taipei City should cooperate with Taipei City and the central government to monitor the river through joint efforts.

Health agencies assured they would reinforce their screening procedures to prevent a similar event from occurring in the future.