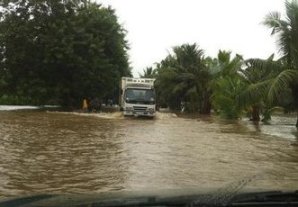 A family of four has died under a landslide in Fiji, as forecasters predict lingering torrential rain in the flood-battered region.

Police told FBC News a 35-year-old father, 30-year-old mother and their two daughters, aged three and one, were buried alive under the landslide in Ba on the island of Viti Levu yesterday morning.

Rescuers could not recover their bodies despite working late into the night, reportedly taking the death toll from the devastating floods to six.

New Zealander Mark James, who is working on boats used to transport people to Fiji resorts, said flood waters had cut him off from tourist areas on Denarau Island for days.

He said locals were suffering, with businesses closed and many struggling to protect their houses from water damage.

Nadi had been shut down under 6m of water and hundreds of locals had been forced into evacuation centres, he said.

Weatherwatch.co.nz forecaster Philip Duncan said the rain was set to continue for another 10 days.

That meant a risk of flash flooding, rising rivers and more landslides in higher areas, he said.

“Potentially it could be as as bad as it has been. All the rain clouds are just not moving.

“You’ve just got torrential rain staying over the country for the next 10 days.”

The tropical low over Fiji was the same one causing flooding in Queensland, Mr Duncan said.

Foreign Minister Murray McCully announced today that New Zealand would make an initial contribution of $350,000 to the relief effort.

“New Zealand’s funding will be made immediately available to the Fiji Red Cross for the distribution of essential relief items to those in need, followed by other agencies identified as best placed to meet immediate needs,” Mr McCully said.

Mr McCully said there were no reports of New Zealanders in Fiji needing urgent assistance.

Ashley and Judy Brown, of Pukekohe, were yesterday flown out of Denarau Island because the roads were washed out.

“It’s bad, really bad – the water’s everywhere and the dam up in the mountain had breached the wall. No one can get in or out there,” Mr Brown said.

“We were lucky to get out.”

Mr and Mrs Brown were evacuated with four other New Zealanders and he said a large number of Australians were also being taken off the island.

The resort they were staying at organised the helicopters for the stranded tourists – at a cost of $118 per person.

Mr Brown said he was now battling to get his travel insurance company to pay for the flight.

The helicopters evacuating people off Denarau Island had to be given special permission to fly because of the dangerous weather conditions.

“It was absolutely bucketing down, it was monsoon weather … it was just rain, rain and more rain. It just carried on,” Mr Brown said.

The couple were due to end their week-long holiday yesterday when they were evacuated, which Mr Brown said was lucky because the situation on the island was worsening. They arrived back in Auckland yesterday afternoon.

“We said let’s get out of here – it’s getting too much for us,” Mr Brown said.

Local boatmen were also evacuating people from Denarau Island and taking them to safety.

The Fijian Ministry of Information said no tourists were stranded on any outer islands and confirmed no flights out of Nadi had been disrupted.