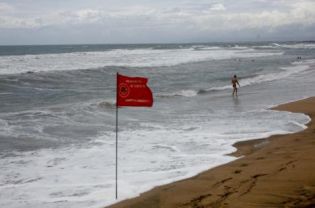 Denpasar. Authorities in Bali have advised against swimming off Kuta Beach, one of the resort island’s most popular tourist sites, due to a reported bacterial bloom in the water.

The government-run Ngurah Rai Fish Quarantine Laboratory announced on Thursday that the bloom caused a drastic drop in the pH level of the water, making it more acidic and killing off large amounts of plankton.

“Under normal conditions a pH test of the water should have yielded a 7, which means it’s neutral,” he said. “But when we tested a sample taken on Tuesday night, it had a pH of 4. Plankton can’t thrive in water with acidity levels that high.”

He said the bacterial contamination of the water was likely due to the large amounts of waste discharged into the sea reacting to unusually high temperatures.

“We don’t know what kind of bacteria we’re looking at because it’ll take at least five days to run the tests to find out,” Eka said.

He added that in the meantime, people were advised not to swim at Kuta Beach or nearby areas because of the risk of skin infections or even respiratory problems as a result of coming into contact with the bacteria.

“If you absolutely have to swim or surf, limit your time in the water to 30 minutes,” he said.

Ida Bagus Kadek Subiksu, head of the Bali Tourism Office, confirmed the report and said his office was working with other authorities to alert the public.

Anak Agung Ngurah Tresna, head of the Kuta lifeguard unit, said his men were already advising the tourists arriving at the beach of the danger.

“We’ve posted our men out across the beach to remind the tourists and we’re also issuing regular announcements over the PA system,” he said.

Tresna said he had sounded the alarm about the possible contamination several days earlier, following tests using a salinometer to measure the salt concentration in the water.

He said normal readings hovered at 30 to 34 millimeters on the salinometer, but at the start of the week they plummeted to 20 mm, a sign of contamination.

He added that as a result of the swimming advisory, tourist numbers at the beach had fallen drastically in recent days.

Gemma Wilkie, an Australian tourist, said she came to sunbathe rather than to swim.

“It’s better to look for another beach that’s not dirty [if you want to swim],” she said.