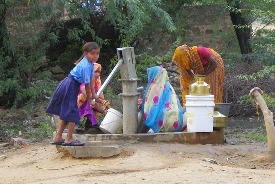 Up to 77 million people in Bangladesh have been exposed to toxic levels of arsenic from drinking water in recent decades, according to a Lancet study.

The research assessed nearly 12,000 people in a district of the capital Dhaka for over a period of 10 years.

More than 20% of deaths among those assessed were caused by the naturally occurring poisonous element, it found.

The World Health Organization said the exposure was “the largest mass poisoning of a population in history”.

It began after hand-pumped wells were installed in the 1970s to tap groundwater.

Scientists say even small amounts of arsenic over a long period can cause cancer of the bladder, kidney, lung or skin.

Bangladesh was chosen for the study because nearly 90% of the population uses groundwater as its primary source of fresh water.