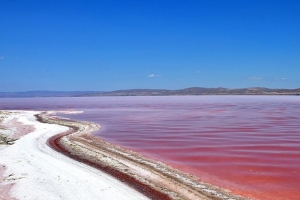 Acidification of ocean waters caused by greenhouse gases is already wreaking havoc on coral ecosystems and will have a huge knock-on impact on human communities, they said in a declaration released in the southern French city of Nice.

“We are deeply concerned by recent, rapid changes in ocean chemistry and their potential, within decades, to severely affect marine organisms, food webs, biodiversity and fisheries,” the appeal to policymakers said.

“Ocean acidification is accelerating and severe damages are imminent.”

The only way to stabilise, and eventually reverse, the trend is to reduce the amount of CO2 in the atmosphere, it said.

“The chemistry is so fundamental and changes so rapid and severe that impacts on organisms are unavoidable,” said James Orr, a researcher at the Marine Environment Laboratories in Monaco.

“The questions are now how bad will it be and how soon will it happen.”

Since industrialisation began in the 18th century, atmospheric levels of CO2 have risen by nearly 40 percent, thanks mainly to unbridled burning of coal, gas and oil.

Much of this CO2 is absorbed by the ocean, rendering it more acidic.

This process makes it harder for numerous marine organisms to build the calcium-based shells and skeletal structures on which they depend for survival. It also changes seawater chemistry, and has been shown to harm organisms ranging from oysters to sea urchins to squid.

CO2 in the atmosphere today aveages 385 parts per million (ppm). By mid-century, the concentration could easily exceed 550 ppm, which would decrease the rate at which coral forms by at least a third, studies have shown.

Even before that point, many coral reefs will already have seriously eroded.

Ocean acidification will also have a huge impact of human communities, the scientists warned.

In a chain of consequences, it will affect marine food webs and lead to substantial changes in commercial fish stocks, threatening protein supply and food security for tens of millions of people.

By 2050, more regions could become chemically inhospitable to reefs, they said.

The statement is called the Monaco Declaration, as it summarises work at an international symposium on the ocean staged in Monaco last October.