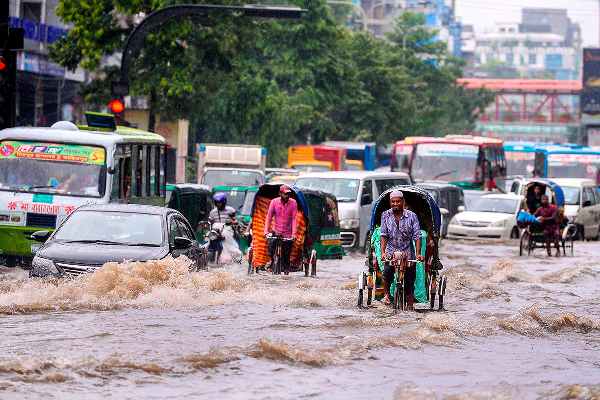 People in low-lying poor nations, such as Bangladesh, are at most risk. Sea levels could rise by up to one-and-a-half metres by the end of this century, according to a new scientific analysis.
This is substantially more than the Intergovernmental Panel on Climate Change (IPCC) forecast in last year’s landmark assessment of climate science.

Sea level rise of this magnitude would have major impacts on low-lying countries such as Bangladesh.

The findings were presented at a major science conference in Vienna. The research group is not the first to suggest that the IPCC’s forecast of an average rise in global sea levels of 28-43cm by 2100 is too conservative.

The IPCC was unable to include the contribution from “accelerated” melting of polar ice sheets as water temperatures warm because the processes involved were not yet understood.

The new analysis comes from a UK/Finnish team which has built a computer model linking temperatures to sea levels for the last two millennia.

“For the past 2,000 years, the [global average] sea level was very stable, it only varied by about 20cm,” said Svetlana Jevrejeva from the Proudman Oceanographic Laboratory (POL), near Liverpool, UK.

“The rapid rise in the coming years is associated with the rapid melting of ice sheets.”

The model, she told reporters here at the European Geosciences Union (EGU) annual meeting, is able to mimic accurately sea levels reliably observed by tide gauges over the last 300 years.

There is little concrete evidence on sea levels for the thousands of years before that, explained POL’s Simon Holgate, who was not involved in the new study.

“There is some limited archaeological evidence [based on] the sill heights of fish enclosures that the Romans used, that’s probably the strongest evidence that there hasn’t been any significant change in sea level over the last 2,000 years.”

Against that, he said, the currently observed rise of about three mm per year is significant, and many scientists working in the field expect to see an acceleration.

The latest satellite data indicates that the Greenland and West Antarctic ice sheets are losing mass, though the much bigger East Antarctic sheet may be gaining mass.

A full melting of Greenland and West Antarctica would raise sea levels by many metres; but the process, if it happened, would take centuries.

“We know what’s happening today from satellite data, but trying to predict what that means in the future is very difficult science,” noted Steve Nerem from the University of Colorado, whose own research concerns global sea levels.

“There’s a lot of evidence out there that we’re going to see at least a metre of sea level rise by 2100,” he said.

However, a rise of even a metre could have major implications for low-lying countries – especially, noted Dr Holgate, those whose
economies are not geared up to build sophisticated sea defence systems.

“Eighty to 90% of Bangladesh is within a metre or so of sea level,” he said, “so if you live in the Ganges delta you’re in a lot of trouble;
and that’s an awful lot of people.”

Dr Jevrejeva’s projections have been submitted for publication in the scientific journal Proceedings of the National Academy of Sciences.