Global warming ‘irreversible’ for next 1000 years 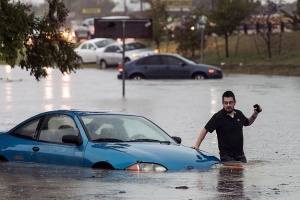 Climate change is “largely irreversible” for the next 1,000 years even if carbon dioxide (CO2) emissions could be abruptly halted, according to a new study led by the US National Oceanic and Atmospheric Administration (NOAA).

The study’s authors said there was “no going back” after the report showed that changes in surface temperature, rainfall and sea level are “largely irreversible for more than 1,000 years after CO2 emissions are completely stopped.”

NOAA senior scientist Susan Solomon said the study, published in this week’s Proceedings of the National Academy of Sciences journal, showed that current human choices on carbon dioxide emissions are set to “irreversibly change the planet.”

Researchers examined the consequences of CO2 building up beyond present-day concentrations of 385 parts per million, and then completely stopping emissions after the peak. Before the industrial age CO2 in Earth’s atmosphere amounted to only 280 parts per million.

The study found that CO2 levels are irreversibly impacting climate change, which will contribute to global sea level rise and rainfall changes in certain regions.

Rising sea levels would cause “irreversible commitments to future changes in the geography of the Earth, since many coastal and island features would ultimately become submerged,” the study said.

Decreases in rainfall that last for centuries can be expected to have a range of impacts, said the authors. Regional impacts include — but are not limited to — decreased human water supplies, increased fire frequency, ecosystem change and expanded deserts.