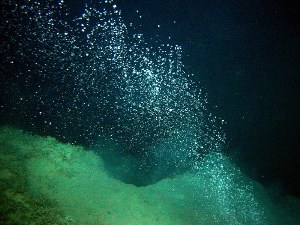 Scientists say they have evidence that the powerful greenhouse gas methane is escaping from the Arctic sea bed.
Researchers say this could be evidence of a predicted positive feedback effect of climate change.

As temperatures rise, the sea bed grows warmer and frozen water crystals in the sediment break down, allowing methane trapped inside them to escape.

The research team found that more than 250 plumes of methane bubbles are rising from the sea bed off Norway.
The joint British and German research team detected the bubbles using a type of sonar normally used to search for shoals of fish.

Once detected, the bubbles were sampled and tested for methane at a range of depths.
Writing in Geophysical Research Letters, the team says the methane was rising from an area of sea bed off West Spitsbergen, from depths between 150 and 400m.
The gas is normally trapped as “methane hydrate” in sediment under the ocean floor.
METHANE HYDRATES
Methane gas is trapped inside crystal structure of water ice The gas is released when the ice melts, normally at 0C. At higher pressure ie under the ocean, hydrates are stable at higher temperatures
“Methane hydrate” is an ice-like substance composed of water and methane which is stable under conditions of high pressure and low temperature.
As temperatures rise, the hydrate breaks down. So this new evidence shows that methane is stable at water depths greater than 400m off Spitsbergen.
However data collected over 30 years shows it was then stable at water depths as shallow as 360m.
Ocean has warmed
Temperature records show that this area of the ocean has warmed by 1C during the same period.
The research was carried out as part of the International Polar Year Initiative, funded by Britain’s Natural Environment Research Council (NERC).
The team says this is the first time that this loss of stability associated with temperature rise has been observed during the current geological period.
Professor Tim Minshull of the National Oceanography Centre at Southampton told BBC News: “We already knew there was some methane hydrate in the ocean off Spitsbergen and that’s an area where climate change is happening rather faster than just about anywhere else in the world.”
“There’s been an idea for a long time that if the oceans warm, methane might be released from hydrate beneath the sea floor and generate a positive greenhouse effect.”
“What we’re trying to do is to use lots of different techniques to assess whether this was something that was likely to happen in a relatively short time scale off Spitsbergen.”
However methane is already released from ocean floor hydrates at higher temperatures and lower pressures – so the team also suggest that some methane release may have been going on in this area since the last ice age.
Significant discovery
Their most significant finding is that climate change means the gas is being released from more and deeper areas of the Arctic ocean.
Professor Minshull said: “Our survey was designed to work out how much methane might be released by future ocean warming; we did not expect to discover such strong evidence that this process has already started.”
“We were slightly surprised that if there was so much methane rising why no one had seen it before. But I think the reason is that you have to be rather dedicated to spot it because these plumes are only perhaps 50m to 100m across.”
“The device we were using is only switched on during biological cruises. It’s not normally used on geophysical or oceanographic cruises like ours. And of course you’ve got to monitor it 24 hours a day. In fact, we only spotted the phenomenon half way through our cruise. We decided to go back and take a closer look.”
The team found that most of the methane is being dissolved into the seawater and did not detect evidence of the gas breaking the surface of the ocean and getting into the atmosphere.
They stress that this does not mean that the gas does not enter the atmosphere. They point out that the methane seeps are unpredictable and erratic in quantity, size and duration.
It is possible that larger seeps at different times and locations might in fact be vigorous enough to break through the ocean surface.
Most of the methane reacts with the oxygen in the water to form carbon dioxide, another greenhouse gas. In sea water, this forms carbonic acid which adds to ocean acidification, with consequent problems for biodiversity.
Graham Westbrook, lead author and professor of geophysics at the University of Birmingham said: “If this process becomes widespread along Arctic continental margins, tens of megatonnes of methane a year – equivalent to 5-10% of the total amount released globally by natural sources, could be released into the ocean.”

The team is planning another expedition next year to observe the behaviour of the methane plumes over time. They are also engaged in ongoing research into the amount of methane hydrate under this area of the ocean floor.
Ultimately, they want to be able to predict how much might be vulnerable to temperature change and in what timescale.