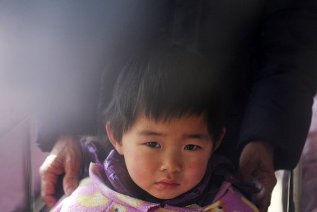 ..Chinese officials in provinces with heavy industrial pollution are restricting access to lead testing or even falsifying test results, and denying children treatment, a US rights group said on Wednesday.

Human Rights Watch accused officials in four provinces — Henan, Yunnan, Shaanxi and Hunan — of trying to cover up the extent of lead poisoning among local children, including limiting their access to blood tests.

“Local authorities are ignoring the urgent and long-term health consequences of a generation of children continuously exposed to life-threatening levels of lead,” said the study, entitled: “My Children Have Been Poisoned: A Public Health Crisis in Four Chinese Provinces.”

Excessive levels of lead in the blood are considered hazardous, particularly to children, who can experience stunted growth and mental retardation.

“But there is not a real recognition of the fact that lead poisoning causes lifelong disability,” Joe Amon, director of the group’s health and human rights division, told a news briefing in Hong Kong.

“This is creating a generation of kids… who will be less able to drive the economic growth that China is counting on.”

The report estimated that “hundreds of thousands” of children, mainly in poor rural villages with nearby factories, were suffering from lead poisoning.

Despite Beijing’s promises of reform, many local and provincial officials were conflicted over their mandate to drive economic growth while enforcing environmental standards on factories, Amon added.

Rapid industrialisation over the past 30 years which has driven China’s rise to become the number two economy has left it with some of the world’s worst water and air pollution, stoking widespread environmental damage and public-health scares.

HRW said test results were sometimes withheld from victims and their families, while children with high lead levels in their blood were denied care or simply instructed to eat “cleansing” foods such as apples, garlic, milk and eggs.

“The bottom line is that lead (poisoning) cannot be addressed by garlic,” Amon said.

Family members and journalists seeking information about the problem are intimidated, harassed and ultimately silenced, the report added.

Earlier this month, more than 600 people, including 103 children, in east China’s Zhejiang province were found with high and sometimes dangerous levels of lead in their blood, according to local health authorities.

The poisonings were linked to tinfoil processing plants in Shaoxing county and reportedly prompted protests on June 8 and 9, with villagers demanding that workshops violating health and environmental standards be shut down.

In May, authorities in Zhejiang detained 74 people and suspended work at hundreds of factories after 172 people, including 53 children, fell ill due to lead.

Nearly 1,000 children tested positive for lead poisoning in the central province of Henan in 2009 with local smelting plants found to be responsible.

But enforcement has been uneven and little has been done to reduce lead levels in villages that are already heavily contaminated, HRW said.

According to Xinhua news agency, the government has pledged to crack down on the industry and ensure that those suffering from lead poisoning receive proper health care and subsidies.
…