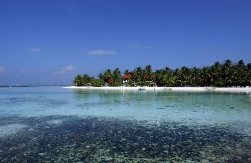 The UN’s talks on climate change are daft and crippled by finger-pointing and the need for consensus, the president of the Maldives, Mohamed Nasheed, was quoted on Thursday by Le Monde as saying.

Nasheed also said emerging economies were as much to blame for global warming as rich nations.

In an interview with the French daily, Nasheed pounded out the frustrations of vulnerable small island states with the 194-party UN Framework Convention on Climate Change (UNFCCC).

“The current negotiation process is stupid, useless and endless. It is based on this principle: two parties reach an agreement, a third one comes alone and says it doesn’t agree and it reduces the ambition of the others,” Nasheed said.

“In essence, even if we reach an agreement, it will be an agreement about nothing. It will be so diluted that it will be of no use,” he said bitterly, calling for “an overhaul of international organisations.”

Nasheed, whose comments were reported in French, was speaking during a visit to Paris.

He also criticised the rift in the UNFCCC talks over who was to blame for the man-made carbon emissions that stoke global warming.

Poor countries say rich countries bear “historical responsibility” as they were the first to burn the coal, gas and oil that cause the problem.

Rich countries say emerging giants such as China, India and Brazil also have to shoulder the burden as they have become huge carbon emitters in their own right.

“If the emerging countries had had the chance to emit as much carbon, they would have done the same, perhaps more so,” he said.

“If the West stopped their emissions and China, South Africa and Brazil carried on emitting on the basis of business as usual, we would still die. The Maldives would disappear.”

Efforts to tackle climate change were ravaged by the near-fiasco of the Copenhagen Summit of December 2009, where world leaders squabbled over targets and burden-sharing.

They cobbled together a last-ditch deal, the Copenhagen Accord, which sets down a voluntary approach of national pledges supported by financial pledges to help poor countries.

The UNFCCC’s parties meet in Durban, South Africa, from November 28 to December 9 for their next annual conference. The big issue will be the future of the UNFCCC’s Kyoto Protocol, whose current roster of promises expires at the end of 2012.

Global warming is predicted by scientists to have far-reaching impacts on the world’s weather system.

It will also cause sea levels to rise, both through the thermal expansion of water and through the runoff of water from melted icesheets and glaciers.