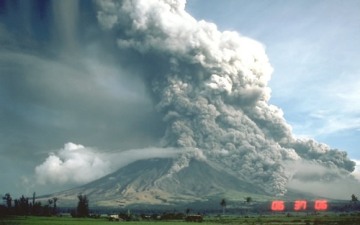 Scientists at a London conference next week will warn of earthquakes, avalanches and volcanic eruptions as the atmosphere heats up and geology is altered. Even Britain could face being struck by tsunamis .

Scientists are to outline dramatic evidence that global warming threatens the planet in a new and unexpected way – by triggering earthquakes, tsunamis, avalanches and volcanic eruptions.

Reports by international groups of researchers – to be presented at a London conference next week – will show that climate change, caused by rising outputs of carbon dioxide from vehicles, factories and power stations, will not only affect the atmosphere and the sea but will alter the geology of the Earth.

Melting glaciers will set off avalanches, floods and mud flows in the Alps and other mountain ranges; torrential rainfall in the UK is likely to cause widespread erosion; while disappearing Greenland and Antarctic ice sheets threaten to let loose underwater landslides, triggering tsunamis that could even strike the seas around Britain.

At the same time the disappearance of ice caps will change the pressures acting on the Earth’s crust and set off volcanic eruptions across the globe. Life on Earth faces a warm future – and a fiery one.

“Not only are the oceans and atmosphere conspiring against us, bringing baking temperatures, more powerful storms and floods, but the crust beneath our feet seems likely to join in too,” said Professor Bill
McGuire, director of the Benfield Hazard Research Centre, at University College London (UCL).

“Maybe the Earth is trying to tell us something,” added McGuire, who is one of the organisers of UCL’s Climate Forcing of Geological Hazards conference, which will open on 15 September. Some of the key evidence to be presented at the conference will come from studies of past volcanic activity. These indicate that when ice sheets disappear the number of eruptions increases, said Professor David Pyle, of Oxford University’s earth sciences department.

“The last ice age came to an end between 12,000 to 15,000 years ago and the ice sheets that once covered central Europe shrank dramatically,” added Pyle. “The impact on the continent’s geology can by measured by the jump in volcanic activity that occurred at this time.”

In the Eiffel region of western Germany a huge eruption created a vast caldera, or basin-shaped crater, 12,900 years ago, for example. This has since flooded to form the Laacher See, near Koblenz. Scientists are now studying volcanic regions in Chile and Alaska – where glaciers and ice sheets are shrinking rapidly as the planet heats up – in an effort to anticipate the eruptions that might be set off.

Last week scientists from Northern Arizona University reported in the journal Science that temperatures in the Arctic were now higher than at any time in the past 2,000 years. Ice sheets are disappearing at a
dramatic rate – and these could have other, unexpected impacts on the planet’s geology.

According to Professor Mark Maslin of UCL, one is likely to be the release of the planet’s methane hydrate deposits. These ice-like deposits are found on the seabed and in the permafrost regions of
Siberia and the far north.

“These permafrost deposits are now melting and releasing their methane,” said Maslin. “You can see the methane bubbling out of lakes in Siberia.
And that is a concern, for the impact of methane in the atmosphere is considerable. It is 25 times more powerful than carbon dioxide as a greenhouse gas.”

A build-up of permafrost methane in the atmosphere would produce a further jump in global warming and accelerate the process of climate change. Even more worrying, however, is the impact of rising sea
temperatures on the far greater reserves of methane hydrates that are found on the sea floor.

It was not just the warming of the sea that was the problem, added Maslin. As the ice around Greenland and Antarctica melted, sediments would pour off land masses and cliffs would crumble, triggering
underwater landslides that would break open more hydrate reserves on the sea-bed. Again there would be a jump in global warming. “These are key issues that we will have to investigate over the next few years,” he said.

There is also a danger of earthquakes, triggered by disintegrating glaciers, causing tsunamis off Chile, New Zealand and Newfoundland in Canada, Nasa scientist Tony Song will tell the conference. The last on
this list could even send a tsunami across the Atlantic, one that might reach British shores.

The conference will also hear from other experts of the risk posed by melting ice in mountain regions, which would pose significant dangers to local people and tourists. The Alps, in particular, face a worryingly
uncertain future, said Jasper Knight of Exeter University. “Rock walls resting against glaciers will become unstable as the ice disappears and so set off avalanches. In addition, increasing meltwaters will trigger
more floods and mud flows.”

For the Alps this is a serious problem. Tourism is growing there, while the region’s population is rising. Managing and protecting these people was now an issue that needed to be addressed as a matter of urgency, Knight said.

“Global warming is not just a matter of warmer weather, more floods or stronger hurricanes. It is a wake-up call to Terra Firma,” McGuire said.