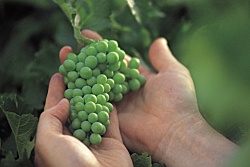 A single glass of even the most contaminated wine isn’t poisonous. But drinking just one glass of wine a day — a common habit in Europe and the Americas — might be very hazardous indeed, calculate biomolecular scientist Declan P. Naughton, PhD, and Andrea Petroczi of Kingston University, London.

Naughton calculated “target hazard quotients” (THQs) for wines from 15 countries in Europe, South America, and the Middle East. The measure was designed by the U.S. Environmental Protection Agency to determine safe levels of frequent, long- term exposure to various chemicals.

A THQ over 1 indicates a health risk. Typical wines, Naughton found, have a THQ ranging from 50 to 200 per glass. Some wines had THQs up to 300. By comparison, THQs that have raised concerns about heavy-metal contamination of seafood typically range between 1 and 5.

“I was surprised at this finding, and would be very interested if regulatory authorities and food-safety people will look at this,” Naughton tells WebMD. “The wine industry should look at ways to remove these metals from wine, or to find out where the metals come from and prevent this from happening.”

The metal ions that accounted for most of the contamination were vanadium, copper, and manganese. But four other metals with THQs above 1 also were found: zinc, nickel, chromium, and lead.

Some 30 other metal ions were measured in the wines, but THQs could not be calculated because safe daily levels for these metals are not known.

All of these oxidating metal ions pose potential problems. But the manganese contamination particularly worries behavioral neurotoxicologist Bernard Weiss, PhD, professor of environmental medicine at the University of Rochester, N.Y. Weiss was not involved in the Naughton study.

“From the point of view of just one of these metals in wine, manganese, I would be concerned,” Weiss tells WebMD. “Any time you see numbers like they have in this study, you begin to scratch your head and wonder about the effects over a long period of ingestion: Not one glass of wine last Tuesday, but a glass a day over a lifetime.”

Manganese accumulation in the brain, Weiss notes, has been linked to Parkinson’s disease.

Based on the maximum THQs for wines from each nation, here’s the list of the worst offenders:

4 Top PicksHow Long Can You Keep That Mayo? Ginseng and Other Foods to Help You Focus 10 Things Your Cat Should Never Ingest Join the Discussion in the Food and Cooking Community

Argentinean and Italian wines did not have significant maximum THQ values.

“If you buy a bottle of wine, the only thing it tells you on the label is the amount of alcohol. I like the idea of labeling wines with the amounts of heavy metals they contain,” Naughton says. “Many wines don’t have these metals. So let customers vote by choice whether they want the heavy metals.”

Where do the heavy metals come from? That’s unknown. Naughton says possible sources include the soil of the vineyards in which the wine grapes are grown, the fungicides sprayed on the grapes, and possible contaminants in the yeasts used to ferment the wine.

Naughton and Petroczi did not directly measure heavy metals in the wines, but calculated THQs from data published in scientific journals. Since there was no data on heavy metals in U.S. wines, they did not include North American wines in their analysis.

Weiss says he’d like to see such data. He’d be interested to see whether national health databases can link health problems to daily wine consumption, and whether wine drinkers have higher concentrations of heavy metals in their bodies than teetotalers do.

In their paper, Naughton and Petroczi note that drinking red wine has been linked to health benefits because it contains antioxidant compounds.

“However, the finding of hazardous levels of metal ions which can be pro-oxidants leads to a major question mark over the protective benefits of red wine,” they suggest.