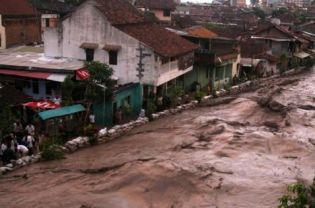 Yogyakarta. Hundreds of people in Indonesia have fled their homes to escape fast-moving mudflows streaming down the slopes of the country’s most volatile volcano.

Disaster official Slamet Sugiono says those affected live along the banks of the Code River, which flows from Mount Merapi into the heart of Yogyakarta, a bustling city 20 miles (30 kilometers) away.

He says hours of incessant rains Monday triggered the flows, which raced down the slopes at speeds of up to 60 mph (100 kph) and inundated homes in knee-high black sludge.

Sugiono said Tuesday that some 400 people had fled.

At least 341 people have been killed in a series of eruptions at Merapi since Oct. 26.

Indonesia has more active volcanoes than any other country in the world.