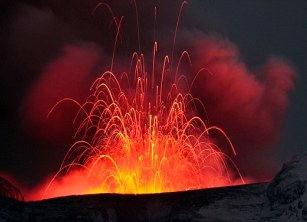 The gigantic underground plume of partly molten rock that feeds the Yellowstone supervolcano might be bigger than previously thought, a new image suggests.

The study says nothing about the chances of a cataclysmic eruption at Yellowstone, but it provides scientists with a valuable new perspective on the vast and deep reservoir of fiery material that feeds such eruptions, the last of which occurred more than 600,000 years ago.

Earlier measurements of the plume were produced by using seismic waves — the waves generated by earthquakes — to create a picture of the underground region. The new picture was produced by examining the Yellowstone plume’s electrical conductivity, which is generated by molten silicate rocks and hot briny water that is naturally present and mixed in with partly molten rock.

“It’s a totally new and different way of imaging and looking at the volcanic roots of Yellowstone,” said study co-author Robert B. Smith, professor emeritus and research professor of geophysics at the University of Utah, and a coordinating scientist of the Yellowstone Volcano Observatory.

Almost 17 million years ago, the deep plume of partly molten rock known as the Yellowstone hot spot first breached the surface in an eruption near what is now the Oregon-Idaho-Nevada border.

As North America drifted slowly southwest over the hot spot, there were more than 140 gargantuan caldera eruptions — the largest kind of eruption on Earth — along a northeast-trending path that is now Idaho’s Snake River Plain.

Two of the eruptions blanketed half of North America with volcanic ash, producing 2,500 times and 1,000 times more ash than the 1980 eruption of Mount St. Helens in Washington state. Smaller eruptions occurred at Yellowstone in between the big blasts and as recently as 70,000 years ago.

Smith said the geoelectric and seismic images of the Yellowstone plume look somewhat different because “we are imaging slightly different things.” Seismic images highlight materials such as molten or partly molten rock that slow seismic waves, while the geoelectric image is sensitive to briny fluids that conduct electricity.

Seismic images of the plume made by Smith in 2009 showed the plume of molten rock dips downward from Yellowstone at a 60-degree angle and extends 150 miles (240 kilometers) west-northwest to a point at least 410 miles (660 km) under the Montana-Idaho border — as far as seismic imaging could “see.”

The new electrical conductivity images show the conductive part of the plume dipping more gently, at an angle of perhaps 40 degrees to the west, and extending perhaps 400 miles (640 km) from east to west. The geoelectric image can “see” to a depth of only 200 miles (320 km).

The lesser tilt of the geoelectric plume image raises the possibility that the seismically imaged plume, shaped somewhat like a tilted tornado, may be enveloped by a broader, underground sheath of partly molten rock and liquids, Zhdanov and Smith say.

“It’s a bigger size” in the geoelectric picture, Smith said. “We can infer there are more fluids” than shown by seismic images. Despite differences, he said, “this body that conducts electricity is in about the same location with similar geometry as the seismically imaged Yellowstone plume.”

The new study has been accepted for publication in Geophysical Research Letters, a journal of the American Geophysical Union, which plans to publish it within the next few weeks.